We continued around the pond taking photos anywhere that looked good when Lisa got a phone call. It was her wife who didnt know she'd be out as a girl that day. They talked for a bit before hanging up. Luckily there was no emergency or a "Hi Hun Lets meet for lunch". That would have created some difficulties. We started up behind the building to where the restaurant is when the couple and their photographer started following us. We could see that there was staff ahead of us and some tables set for romantic, engagement pictures. Lisa appeared to be a little uncomfortable about the situation and I suggested we go back down to the pond area. She as right to not want to be interfering or distracting to their fine day. We did have to pass them as we walked back and they asked us how we were doing. I answered that we were doing great. I'm sure my voice did not sound femm at all. We continued taking photos until we were satisfied and then started back to the cars just as it was starting to rain. Perfect timing. But knowing that the shower would be short lived we agreed to drive up into the mountain, change clothes and take some more casual photos.

The photo-op possibilities were endless! We sat in chairs, posed beside fountains, on bridges, pathways and ponds. There was even a landscape creation of Cinderella's carriage. We were having so much fun but the day was warming up so I had to take off my sweater to keep from ruining my makeup with sweat.

As the day continued, we noticed a couple with a photographer and an some employees on the grounds as well going to different spots and taking photos.  I was still a little worried that they would question us or ask us to leave even though we had been left alone up to that point. Most places with such scenery charge a significant fee for people to use for their photos, at least if done professionally. 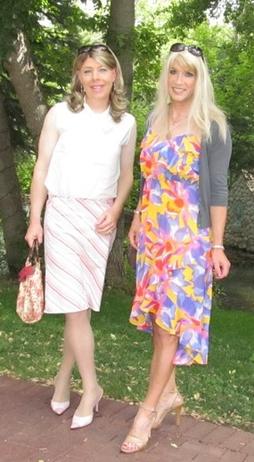 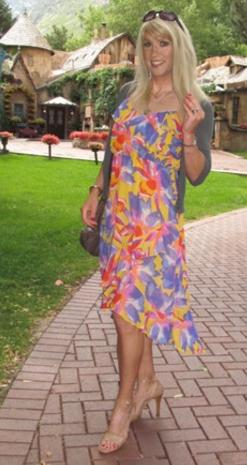 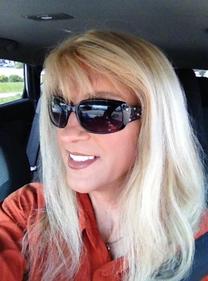 I got to the restaurant right at 11am. Apparently it only serves dinner so the place was deserted except for 3 or 4 landscape gardeners...

Although they didn't pay much attention to me I was still daunted to try to walk across the parking lot and to the gardens with them watching. Soon Lisa arrived and parked next to me. She looked fantastic as always. She is so natural looking and has such feminine facial features. Her hair and makeup was gorgeous and she had transformed in her car!

The weather forecast had called for cloudy skies but the sun was shining which is bad for pictures so we had to be sure to stay in the shade or keep our backs to the sun.

We started the long walk up to the restaurant and realized the quaintness of the brick and cobblestone walkways would be quite a challenge in high heels. But with the incredible beauty of the area and the amazing number of photo spots we knew it would be well worth it.

We stopped first at a little cottage that can be rented out. The landscapers stopped near by and worked on something. Since we weren't there as patrons we weren't sure if we would be allowed to take pictures on the grounds but they didnt bother us so we kept finding new spots for pictures and poses. ​​

It seems that over the past year Lisa and I have been able to coordinate schedules to have an outing together about every 3 or 4 months. We were lucky enough to have that opportunity again and decided to go to the area's nicest restaurant which has incredible grounds for photo possibilities. I had eaten there recently and realized this would be a great place to do some cross-dressing photos

.Lisa said she could meet me there at 11am which was perfect because it gave me plenty of time to get ready. I used the time well and painted my finger nails and toe nails. I had let my fingernails grow pretty long in anticipation of the day.

Since it was a nice sunny early summer day I decided to wear a brightly colored sundress. My wife had bought it a couple of weeks earlier and said she got it for us to share. I added a little cardigan sweater to help conceal my shoulders and arms which are not as slim as I would like and completed the outfit with nude high heeled sandals. As I always try to do, I thought about what most women would wear in such a situation and decided to not wear nylons or panty-hose even though I like the way they look.

Before leaving home I prepared to use my usual strategy of stealthily getting out of the neighborhood by putting baggy clothes over my outfit, putting on sunglasses, and sneakers and placing the removed items in a bag.  This time, however, a couple of neighbors happened to be standing accross the street having a conversation so I had to wait a bit for them to leave before I could pull the car out of the driveway. As soon as I was out of the driveway I realized a flaw in my plan. Usually I cover up my lips with a my hand but with bright pink nail polish on that was no help. Luckily I didnt encounter anyone as I drove throught the neighborhood.

I was very self-conscious to be driving in my drab-stealth mode and found a church parking lot topull into and put back on the wig and ear rings. Driving fully dressed as a woman is much less stressful than trying to hide the feminine transformation.